Whether one asks permission beforehand, or forgiveness afterward, the question of art and pain wants attention. Do writers—as artists—have the right to expose secrets and suffering? Does making art excuse or forgive the breach of faith? Are artists somehow a breed apart—not bound by loyalty or decorum? If the work of art is “great” does that excuse whatever pain might have been inflicted in its creation?

Dorothea Lange is best known for her photograph titled Migrant Mother (1936) of Florence Owens Thompson, a destitute pea picker she met during the darkest days of the Depression. In 1960, Lange gave this account of her experience taking the photograph: 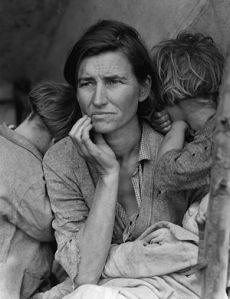 I do not remember how I explained my presence or my camera to her, but I do remember she asked me no questions. I made five exposures, working closer and closer from the same direction. I did not ask her name or her history. She told me her age, that she was thirty-two. She said that they had been living on frozen vegetables from the surrounding fields, and birds that the children killed. She had just sold the tires from her car to buy food. There she sat in that lean-to tent with her children huddled around her, and seemed to know that my pictures might help her, and so she helped me. There was a sort of equality about it.”

It is reported that Lange always asked permission before she took a picture. For many artists, asking permission isn’t important. Or even considered. Especially those who believe, as did William Faulkner: “the writer’s only responsibility is to his art…If a writer has to rob his mother, he will not hesitate; the ‘Ode on a Grecian Urn’ is worth any number of old ladies.”

Faulkner’s casual disregard for consequences sidesteps reality. Whether the writer is telling secrets or simply stating the facts as she understands them to be, there is always action and reaction. The thing done cannot be undone. A work such as Mary Karr’s Liar’s Club (Penguin Books, 1995) lays bare the rawest truth. The sweeping up is someone else’s task.

And yet: Anticipating reaction often stops writers cold and in doing so, derails the art.

I’ve struggled with these questions in my own work and I’ve come to believe that there is no absolute. “Situational ethics” is a slippery slope…but here I think it applies. The writer must ask his or her motives and must admit the many (and contradictory) forces that forge any important decision.

This blog post includes a clip from an interview with the writer, Michael Sinclair. He’s a poet, fiction writer and visual artist living in Iowa. By way of disclosure, I’ve known Mike more than 20 years. His work can steal my breath away. He came face to face with action/reaction after writing a poem. His hard-earned insight holds hard facts.

2 Responses to Art vs. Pain